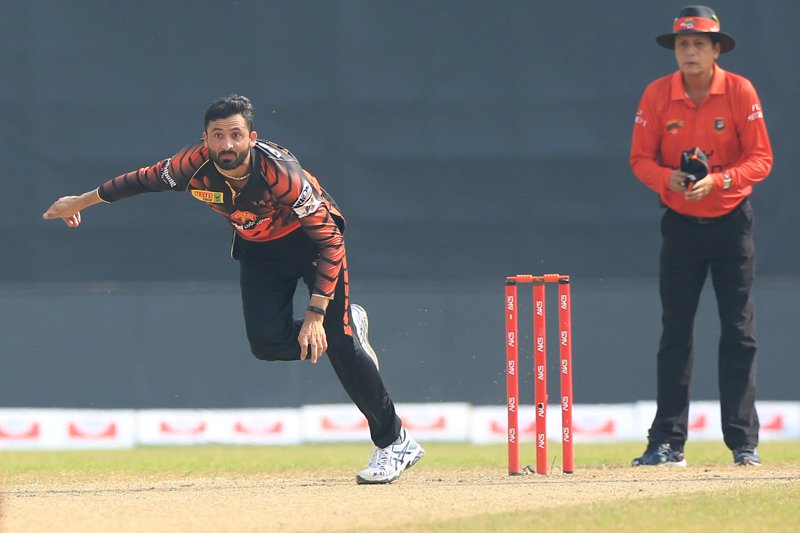 Pakistan pacer Junaid Khan was in red hot form last year for Khulna Titans as he picked up 20 wickets in BPL 4, finishing as the second highest wicket-taker. The paceman arrived in Dhaka two days ago and was included in the Khulna playing XI in their match against Rajshahi Kings Tuesday. And Junaid wasted little time making an impact, bagging two wickets in the very first over. First, he got the wicket of opener Mominulhaque (five) as the left-hander was caught by first slip fielder NazmulHossianShanto. Then Junaid dismissed Kent’s Daniel Bell-Drummond (nought), who played on. And so, it was a good start for Junaid and the Titans as well.

Khulna batsman ArifulHaque played a superb unbeaten 43-run innings off just 19 balls. But at one stage, Khulna were on the verge of defeat, struggling on 123 for the loss of seven scalps after 16.3 overs when big hitter Carlos Brathwaite lost his wicket. But Ariful formed an unbroken 40-run partnership with No 10 batsman Junaid to snatch victory from the jaws of defeat. But the main damage was done in the 17th over. Ariful smashed 17 in that over against seamer Hossain Ali, which proved crucial in the context of the match. Ariful struck two fours, one six and a double in that over, which laid the foundation for Khulna’s comeback. The in-form right-hander struck a six and a four in the last over to clinch the win but that 17-run over was most important, considering Khulna’s fightback.