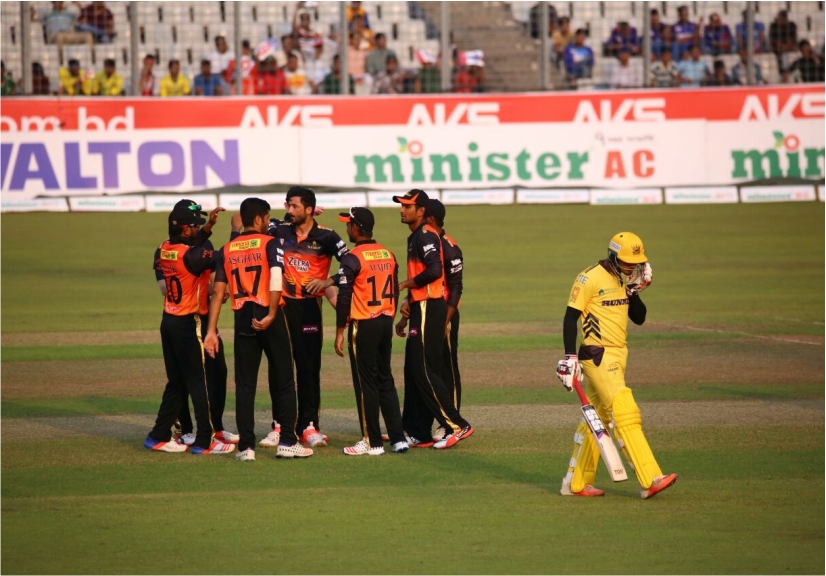 Khulna Titans won the toss and elected to bat

Man of the Match: Mahmudullah

It was a sunny afternoon that turned into a tense evening under lights. It was an enthralling encounter between two sides going all the way to the final ball and not giving up. Titans against the Kings, the orange army against a sea of yellow. In the end, one final over made all the deference, and the Titans were able to pluck out of uncertainty a brilliant victory.

Khulna Titans went about setting a target after winning the toss, and made a decent start with West Indian Nicholas Pooran winding up and striking a few boundaries off the Rajshahi quicks, but he soon fell to the spin of the ever-impressive Mehedi Hasan Miraz. The Titans were in the hunt for quick runs, as a result losing wickets in regular intervals. Abul Hasan Raju took most advantage of the aerial shot attempted by the Titans batsmen, picking up 5 wickets from his 4 overs, out of which 4 were caught in the deep.

Mahmudullah and Riki Wessels contributed 32 runs each for the Titans at the middle and the early stages respectively. But the momentum always remained with Rajshahi Kings till the final two deliveries of the Titans innings.

Pakistan’s youngster Mohammad Asghar managed to score 8 off the final two balls in unorthodix fashion, and brought in some momentum for the Titans in the process, as the score went past 130-mark.

With an improbable score to defend in a pitch that was good for batting, the Titans needed early wickets, but conceded 12 runs from the first over instead. Just when it looked the Kings may run away with the match, Pakistan speedster Junaid Khan began to topple the top order. He got Nurul Hasan, then Sabbir and then Umar Akmal in quick succession, and the Titans were strongly back in the game.

The spinners controlled the middle part of the game, and economic spells from Mosharraf and Asghar tightened the screws of the Rajshahi innings. Mominul Haque opened for the Kings, and he seemed to be the lone man standing, playing well and trying to forge partnerships. His most effective partnership was with Kings skipper Darren Sammy, which threatened to take the game away from the Titans.

With just about a run-a-ball needed, Sammy was picked up by Shafiul, who got Mominul as well, swinging the balance again in Khulna’s favor.

And the battle of runs and balls went on head-to-head until the final over came, and the Kings had a relatively easy equation of scoring 7 runs from the final over.

With all cards thrown at the Kings, the Titans captain took the ball himself. And the over went like this: 1-1-1wide-W-W-0-W!

As Mahmudullah ran towards his team-mates and the reserves sprinted to the field, the Titans flag was held high by the fans who came in numbers to support their beloved franchise from Khulna.

The Titans will face Rangpur Rides on the evening of November 10 in their next match.