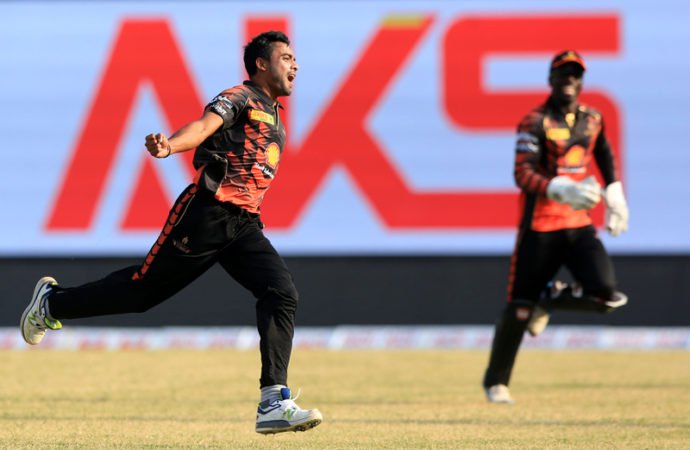 Chasing a challenging 171, Chittagong were rocked in the very first over when Khulna pacer Abu Jayed removed both the openers Luke Ronchi (two) and Soumya Sarkar (nought) off back-to-back deliveries. Jayed also took Chittagong’s third wicket in the third over as No 4 batsman DilshanMunaweera (10) was brilliantly caught at deep mid-wicket by South African Rilee Rossouw.

Chittagong offered some resistance for the fifth wicket as captain Misbah-ul-Haq and Zimbabwe’s Sikandar Raza formed a 59-run partnership. But pacer Shafiul Islam cleaned up Raza for 37 before Jayed picked up the wicket of the veteran Misbah (30) in the 16th over as Chittagong were eventually out of the chase.
Chittagong managed 152 losing seven wickets in their stipulated 20 overs.

Jayed was the best bowler for Khulna taking four wickets for 35 runs. The West Indies’ Jofra Archer, Carlos Brathwaite and Shafiul bagged one wicket each.Jayed was adjudged man of the match for his brilliant performance with the ball.

Earlier, Misbah won the toss and elected to field.It was not a good start for Khulna as they lost three wickets within 29 runs. Khulna were in further trouble as they lost Rossouw in the 10th over with the scoreboard reading only 68.Captain Mahmudullah and No 6 batsman ArifulHaque then built a 35-run stand for the fifth wicket.

Mahmudullah lost his wicket in the 16th over, thanks to a magnificent low catch by Chittagong’s AnamulHaque.Windies big-hitter Brathwaite then came to bat and his partnership with Ariful for the sixth wicket turned the match for Khulna. These two scored 55 in just 15 balls, taking Khulna to a formidable total. On the way, Brathwaite scored 12 against spinner Sanjamul Islam in the 17th over. But Khulna’s best batting display perhaps came in the next over when Ariful scored 24 against Chittagong leg-spinner TanbirHayder.

Ariful smashed 6, 2, 4, 6, 0 and 6 in that over.Eventually, Brathwaite was cleaned up by Subashish Roy after making 30 off just 14 balls with two boundaries and three sixes.At the other end, Ariful hammered 40 off 25 balls with one four and four sixers.