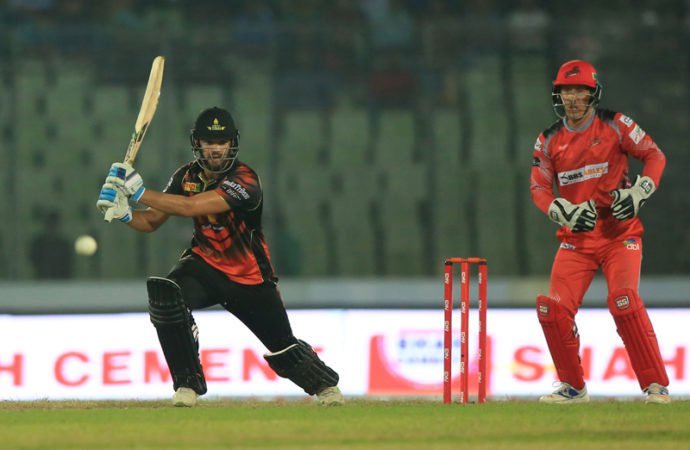 Khulna Titans posted their third win of BPL 2017 as they defeated Chittagong Vikings by five wickets at Mirpur Sher-e-Bangla National Cricket Stadium in Dhaka Friday. Chasing 161, Khulna made a shaky start as opener Michael Klinger got out in the second over scoring only one run. But the other opener Rilee Rossouw played some delightful shots all around the ground, keeping the scoreboard ticking for Khulna.

Rossouw scored 49 off just 26 balls before being cleaned up by spinner Al Amin. Captain Mahmudullah remained unbeaten on 48 off 35 balls to guide Khulna to safety with 10 balls to spare. The in-form ArifulHaque scored 34 off 24 balls with three sixes. Earlier, Chittagong were asked to bat first by Mahmudullah. Chittagong made three changes to their playing XI as captain Misbah-ul-Haq, Sri Lanka’s DilshanMunaweera and pacer Subashish Roy were dropped in favour of South Africa’s Stiaan van Zyl, Afghanistan’s NajibullahZadran and Al Amin.

The start was not good for Chittagong as they lost makeshift captain Luke Ronchi in the very first over. Khulna pace bowler Abu Jayed yet again picked up a wicket in his first over. No 3 batsman AnamulHaque was promoted to the batting order and the right-hander played a superb innings of 62 off 47 balls with five fours and three sixers.
Anamul formed a 95-run partnership for the second wicket with the other opener Soumya Sarkar. Soumya scored 32 of 34 balls. Chittagong eventually registered 160 losing five wickets in their stipulated 20 overs. A total of six catches were dropped by the Khulna fielders, otherwise, Chittagong’s total could have been much less.

Jayed was the best bowler for Khulna as he bagged three wickets conceding 26 runs. It was Rossouw though who was adjudged man of the match.