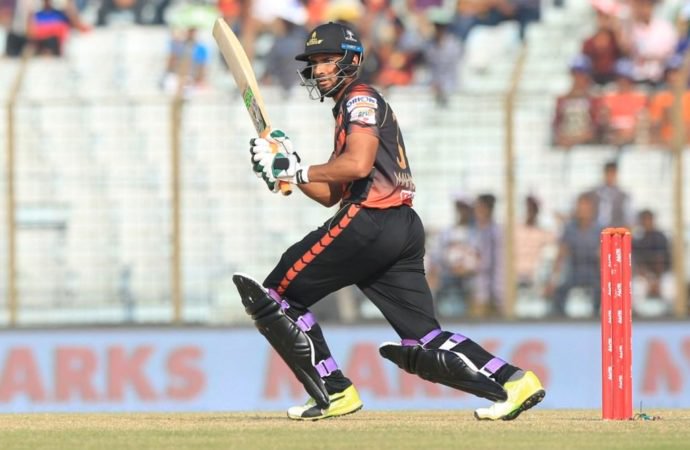 Khulna Titans captain and all-rounder Mahmudullah has become the highest run-scorer in the BPL T20 after scoring 59 runs against Rangpur Riders at Zahur Ahmed Chowdhury Cricket Stadium on Friday.
Mahmudullah captained Khulna in BPL 4 and is also leading the Titans in BPL 5. Previously, he played for Chittagong Kings in the inaugural season of the money-spinning tournament, and then in the second edition as well. In the third season, the prolific all-rounder moved to Barisal Bulls. And finally, he became the icon player of Khulna before being appointed captain of the Titans in BPL 4.

Friday’s 36-ball 59, Mahmudullah’s total runs in BPL now stand at 1336 runs in 54 innings. Mahmudullah has also taken 29 wickets in 41 innings so far in the history of the BPL with an economy rate of 7.01. Mushfiqur Rahim is in second position in the highest run-scorers’ list with 1292 runs in 49 innings. The other batsmen who crossed the 1,000-run mark are Tamim Iqbal (1069) , Shakib al Hasan (1058), ImrulKayes (1051), Sabbir Rahman (1043), AnamulHaque (1024) and Nasir Hossain (1018). Mahmudullah scored 396 runs in 14 innings for the Titans last season with an average of 33. He also took 10 wickets in 12 innings and was adjudged man of the series in BPL 4. And this season, the captain fantastic has started from where he had left off last year, making 248 runs in the ongoing BPL 5 with an average of 41.33. When queried about his BPL achievement, the humble all-rounder replied with his ever polite smile, saying he is happy to make contributions for the team’s cause. “I am contributing for my team with runs. That is more satisfying to me. It is important to win close matches. Local players are playing well. It’s a positive sign for our cricket. Afif [Hossain] is bowling well. He is an asset for our cricket,” Mahmudullah said during the post-match press conference in the port city yesterday.

The captain fantastic is not only brilliant with both bat and ball for the Titans but also never fails to inspire the young players to perform better and make their mark in a glitzy tournament like the BPL. “My team, Khulna Titans’ captain Mahmudullah Riyadbhai has given me lots of support. He told me that I batted well last season and remained not out many times. He gave me suggestion about finishing the innings this year as well. His faith upon me gave me a lot of confidence and self belief,” youngster ArifulHaque praised his captain after playing a match-winning knock against Rajshahi Kings last week. So what is Mahmudullah doing to inspire young lads like Arifur or Afif? The answer is simple – “give them freedom”. The answer may be simple but this is one of the most important things for a youngster to start the career on a high note.

“If you don’t play with freedom in T20 cricket then it becomes difficult to perform. As a captain I am trying to give young players that freedom. I told them to play with their hearts and play with no pressure. Because if fear of failure affects them, then it may become impossible to perform in big a stage like the BPL. So I always try to encourage them to play their natural cricket during a match,” the 31-year old concluded.