Mahmudullah repeat final over spells victory for the Titans 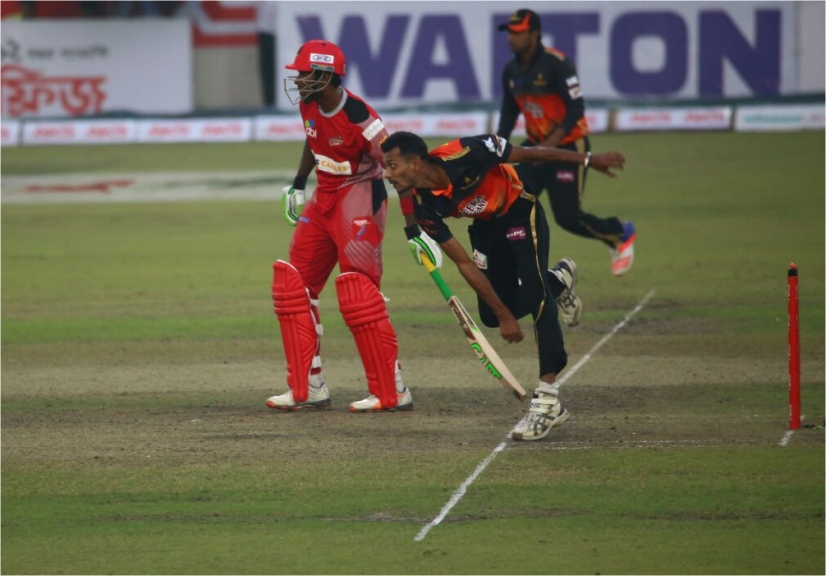 Chittagong Vikings won the toss and elected to field.

Man of the Match: Mahmudullah (KT)

Mahmudullah had bowled a spectacular final over to give the Titans their first victory in their first match, and a repeat was required in match 3, when the Titans skipper took the ball in hand and had to defend 6 runs from the final over.

It was a mixture of good tight bowling and some callous shots that created a climax like that, with Chittagong Vikings set a target of 128 to win and a strong batting line-up led by Tamim Iqbal rearing to go.

There were 3 changes in the Titans line-up, with Kevon Cooper, Hasanuzzaman and Mosharraf Rubel coming in for Mohammad Asghar, Abdul Majid and Nur Saddam.

Cooper started the damage for the Titans picking up the openers with Mosharraf and Shuvagata keeping things tight. Shafiul came in and picked up a 4-for, pegging the Viking chase into a deep hole. But one man stood on the way: Mohammad Nabi. He was successful with the ball, and, along with Chaturanga De Silva, threatened to take away the game with some big hits towards the end of the innings. Then came the final over drama, and Mahmudullah fittingly had to dismiss Nabi with 5 runs needed of the final ball to give the Titans their second win in 3 matches. He had got rid of De Silva and Abdur Razzak in the same over before it was him against Nabi.

Earlier in the day, the Titans made an electrifying start, picking up 26 runs from the first couple of overs, with Englishman Riki Wessels opening for the Khulna side for the first time. He got hold of veteran Abdur Razzak and later Shuvashish Roy to pick some quick boundaries, while Hasanuzzaman, on his BPL debut, gave him good company.

Hasanuzzaman lofted Nabi and was caught in the deep, and Shuvagata followed soon after trying to play over the top of mid-off but failing to clear the fielder. Nabi picked up both scalps.

Razzak came back from his disappointing start, getting Wessels just when he was looking dangerous. A subdued period of play went along for the Titans after that, with runs drying up and wickets falling at regular intervals. Mahmudullah did not last long, and the Titans were looking down the barrel at 52/4 in the 9th over. Alok Kapali forged a 24-run partnership with Pooran, who came to bat down the order. After Kapali’s departure, Pooran and Ariful forked out 48 runs at more than 10 an over to take the Titans to 127 for 7. Pooran got out scoring 29, while Ariful remained not out on 25 off 16 with 2 massive hits to his name.